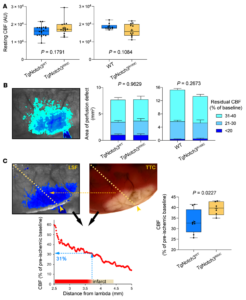 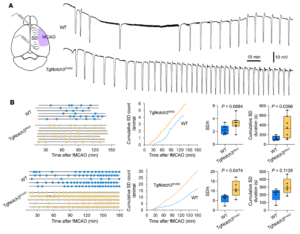 Proposed gliovascular mechanism of extracellular K+ regulation when local buffering mechanisms are exceeded during spreading depolarizations. (i) Upon intense depolarization states, such as anoxic or spreading depolarization, extracellular K+ concentration ([K+]e) can rise above the 10–12 mM ceiling. (b) Astrocytes play a major role in regulating [K+]e via rapid uptake and spatial buffering through the astrocytic syncytium. (c) Astrocytes send their end feet, almost completely encasing the cerebral vasculature, including the capillary bed, providing a route for gliovascular K+ siphoning. (d) The massive rise in [K+]e during an SD might also facilitate direct entry of K+ into the perivascular space to reach the capillary endothelium. (e) Astrocyte end feet have high K+ conductance, in part, due to BK channels activated by intracellular Ca2+ elevations, such as those observed during SD, and release large amounts of K+ into the tight perivascular space. (f) This perivascular K+ is then taken up by the endothelial Na+/K+-ATPase, which is densely — and asymmetrically — localized on the abluminal membranes. (g) Endothelial cells then release the K+ into the blood stream via channels and/or pumps on the luminal membrane, including Kir2.1, which is known to be activated by elevated perivascular [K+]e. (h) Notch3R169C mutation is associated with impaired endothelial Kir2.1 channel function, linking CADASIL to impaired vascular K+ clearance. Learn more. 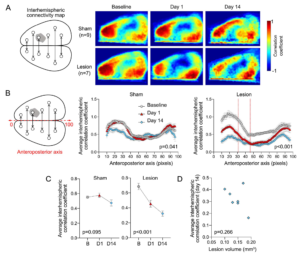 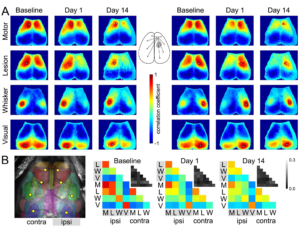 Seed-based connectivity maps. (A) Average RSFC maps generated at baseline and 24 h after L-NIO injection using 4 seeds on each hemisphere as indicated (white dots). The method to calculate the average correlation coefficient between each pixel and all other pixels is shown for a representative seed in the middle inset. (B) Averaged connectivity matrices among the 8 seeds. The absolute value of the standard error of the correlation coefficients for each pair in the matrix is shown in the upper right of each panel in grayscale. Color and grayscale bars are for the connectivity matrix and standard errors, respectively. The sham group is shown in Supplementary Figure 1. Learn more. 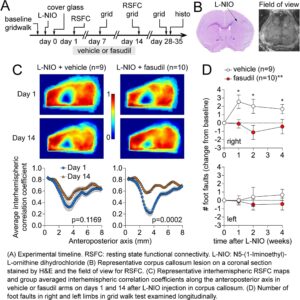